friend something mind-boggling occurred. We had caught quite a

few good hand sized fish and they had all but quit biting. It was

stop and head home. Like most all fishermen we could fish a little

longer and decided to go around the next curve at least.

You know the one more cast rule.

What happened next started off innocent enough, but was to become

an all out life long obsession.

tree that was blocking our path. I had a cold chill run up my back

and make the hair stand-up on my neck. As we scrambled to both

stop the boat and back out, it took all my nerve not to jump ship.

from the top of my bow mounted electric motor. It had to be over

18” across with thousands of wasp. These are the hurtinest stings

you can ever get, and enough of them will make a grown man cry.

for the boat to go thru.

spray that could shoot over 20 feet. After relocating the boat a safe

distance away he blasted the nest. It sounded like a helicopter

up as a group. The spray acted quickly disorienting and disabling

the river. They were constantly flapping their wings at a super rate

of speed in desperation ( Buzzing Loudly) only to be smacked by Bream.

This smacking sounded like someone shooting a 22 short, only at

1000 rounds. Every wasp that landed on the water was eaten while

still buzzing. When it calmed down we still could not get anymore

bites on crickets. Yet we new they were there, everywhere.

This lesson I would never forget, the impression was permanent.

grand kids. A fly that I presume got sprayed with bug spray fell on

it's back on my table. The constant buzzing as it layed on it's back

dying was the same sound.

As was normal during this time I had a pager for business. When

trying to have conversations I liked to put my pager on vibrate. For

some reason today I would lay the pager on the counter top, and

not hook it to my belt.

sound I wanted to duplicate. Over the years I kept trying to

duplicate the sound and yet make it the right size for bream. So far

I haven't been able to get it that small but it got me thinking...

All fish start off as tiny little guys that eat bugs, bugs vibrate and

this is instilled into their brains.

The first lure I tried was a 'devilshorse' with awesome results. 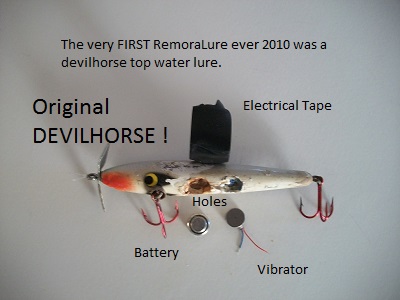 system is built into my RedBug. The RedBug attaches to almost

any lure on the market today, making it vibrate buzz and humm.

Because my flagship system (RedBug) attaches to a lure and

makes it vibrate buzz and humm. I Trademarked my company

name RemoraLure®. A Remora is a saltwater fish that attaches

itself to other fish with a sucker on the top of it's head. Mostly to

Sharks, Ray's and gets free rides as well as meals while feeding on

Purchase our RedBug or any of our battery powered vibrating

fishing lures with the RemoraLure® System built in.